Before diving into the topic at hand, I would like to mention that the aim of this series, about Survival Analysis, is to put together the large amount of information already available in public domain and give the intuition behind the concept. Please check out the reference section for references.

Let us start with defining the basic terms used in survival analysis,

Survival analysis is a statistical method which analyses data to predict the time of occurrence of one or more event.

The event can be death, occurrence of a disease, marriage, malfunctioning of a machine, etc. The event of interest should be well defined at a specific point of time without any ambiguity.

Time from the start of the study till the occurrence of event is called survival time.

When we don’t have the true survival time of the system, the truncated survival time is known as censoring. Censoring happens when,

There are 3 types of censoring namely,

Consider 3 patients A,B and C who are part of a clinical study. 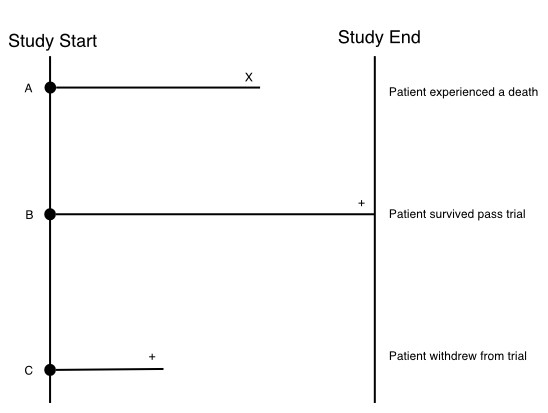 Patient A: Experiences event before the end of study.

Patient B: Doesn’t experience the event during the study.

Patient C: Withdrew from the study midway and we don’t have any idea as to whether the patient experienced the event or not after withdrawing from the study.

Left censoring is when the actual survival time is less than the observed survival time. Let us illustrate this with the below example,

Suppose we place an individual understudy for a particular viral infection. Upon testing the patient, it is observed that the patient has already been infected by the virus, now since we don’t know the exact time at which the patient was infected with the virus, we have to truncate the survival time from the left. This is called left censoring.

Since right censoring is the most commonly occurring scenario, in upcoming sections when mentioned as censoring, it is assumed to be right-censored.

t — A specific value of interest for T. e.g., (T > t = x) means whether the survival time is beyond x unit time. Time is measure in units of days, weeks, months or years.

d — Random variable denoting the occurrence of event or censoring.

(d = 1 denotes the occurrence of the event, d = 0 denotes censoring)

Survival data are generally described and modelled in terms of two type of quantitative functions, namely Survival and Hazard.

Survival(or Survivor) function, S(t), is the probability that the event does not occur from the time of origin of study till the specific time t.

Following are the characteristics of a survivor function,

Hazard function, h(t), is the probability that an event occuring at a particular time t. To put it in another way it is the instantaneous rate of change of probability of an event at time t. Hazard function gives the risk of having an event at any instant, given the individual has survived till that instant.

P(t<T≤t+∆t | T>t) is the probability that the event occurs somewhere between t and t+∆t.

So as ∆t approaches 0, we get the instantaneous risk of having an event.

It is important to note here that Hazard function is not a probability as it is divided by time. Hence the hazard value ranges from 0 to ∞.

Relationship between Survival and Hazard function:

Unlike Survival function, computing Hazard is difficult. One way to overcome was to find a relationship between Survival and Hazard function and calculate hazard using the survival function.

Now let us take differentiation of log of S(t)

Above conclusion was arrived using chain rule in differentiation,

Taking integral on both sides,

This concludes the proof that establishes the relationship between survival and hazard function.

From the above equation, it is intuitively evident that the Survival function decrease with the increase in Hazard.

In this tutorial we saw the fundamentals of survival analysis and got familiar with the terms and notations used in Survival analysis. In the upcoming posts we will look into different statistical methods available for finding and comparing the survival and hazard function.

We use cookies to ensure that we give you the best experience on our website. If you continue to use this site we will assume that you are happy with it.Cookies are Great !DeclinePrivacy policy